The current state-of-the-art in pre-clinical lung function measurements is the evaluation of the mechanical properties of the respiratory system using the forced oscillation technique. This technique, which is at the heart of the flexiVent system, derives from a classic engineering method of characterizing dynamic systems. In this approach, the respiratory system is probed with a specific test signal (e.g. air signal sent by the flexiVent piston), its response to the imposed input signal is captured via specific output signals (e.g. pressure changes), and the relationship between input and output signals is characterized using a transfer function that is referred to as impedance or, more specifically in the present case, respiratory input impedance (abbreviated Zrs). 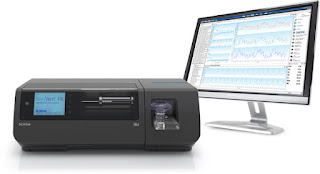 Respiratory input impedance is the primary outcome of a respiratory mechanics assessment using the forced oscillation technique. In the flexiWare software, it is obtained following the execution of a prime perturbation (e.g. Quick Prime-3) and is automatically calculated and graphically represented against the oscillating frequency of the input signal. Respiratory input impedance expresses a complex relationship between flow and pressure. This function has two separate components, resistance (upper graph) and reactance (lower graph), and captures the overall opposition of the respiratory system to the imposed perturbation.

Impedance data can be rich in structure-function related information. However, in order to be meaningful, it needs to be physiologically interpreted. The interpretation can either be qualitative, via a detailed analysis of the curves and their frequency-dependent profiles, or quantitative, through the use of anatomically-based advanced mathematical models describing the mechanical behaviour of the lung.

In pre-clinical research, while the former approach was used initially, the latter one currently constitutes the norm. The true power of this approach comes from the ability of the constant phase model to fit the entire impedance data and, through specific parameters, partition the response between airway and lung tissue mechanics. By doing so, the method provides a more straightforward access to the peripheral lungs than alternative techniques which are highly invasive, technically demanding and of low throughput.

Please contact us to see how you can use the forced oscillation technique to its fullest potential to meet your research objectives or explore new scientific avenues.