Conscious measurements allow researchers to quantify effects of diseases or therapeutic interventions on the drive to breathe, also referred to as “Pumping apparatus” 1. The breathing drive involves different components that regulate respiration including respiratory muscles, the central nervous system, and chemo/mechano-receptors. Outcomes such as tidal volume, respiratory rate, minute volume, inspiratory, expiratory, and apneic periods are particularly useful in safety pharmacology studies, and research into sleep and neuromuscular diseases. Whole body plethysmography (WBP) is the simplest and least invasive approach that permits conscious in vivo measurements. However, researchers must consider the inherent limitations of WBP2 in regards to the accuracy of breathing volumes and assessment of airway hyperresponsiveness. Other techniques such as head-out plethysmography (HOP) or double chamber plethysmography (DCP) are often useful in providing a more accurate and validated assessment of the lung function. 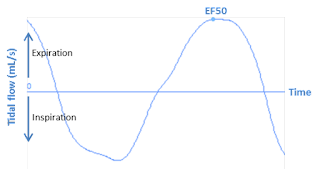 In difference to WBP, where the subject is freely moving within a chamber, HOP/DCP measurements are acquired in restrained subjects, allowing true inspiratory and expiratory flow measurements and their corresponding parameters. One such outcome, the tidal mid-expiratory flow (EF50), is particularly interesting as it has been described and validated over the last 20 years as an index of flow limitation and airway obstruction.  The parameter is calculated on a breath-by-breath basis during spontaneous tidal breathing and typically decreases in presence of airflow obstruction.

EF50 is often used in respiratory safety pharmacology studies performed under the ICH 7AS guidelines, where the HOP technique is a standard for conscious lung function assessment.  However, the parameter can also be obtained with DCP, allowing for exposure to nebulized substances and/or the ability to record nasal and thoracic flows separately.  Using this approach, EF50 can also be used to describe airway responsiveness changes to broncho-active substances in conscious mice, either naïve or allergic.

Since EF50 does not provide a direct measurements of resistance, it is generally accepted that any change in this parameter would be followed by a comprehensive lung function assessment such as that provided by the flexiVent system.